Around this time five years ago I was finishing up my first summer teaching at a tech summer camp where we spent one week alternating between four subjects: filmmaking, block programming, digital audio and robotics. I was comfortable with two of the four, but after spending 40-hours each week on each subject I became much more comfortable with block programming and robotics, the two subjects I was less familiar with. As Summer turned to Fall, I rediscovered the fun of play and just building things with LEGOs. That exploration eventually became an opportunity, having spent the last four years working with elementary students on computers, drawing, playing with LEGOs, shooting off water-rockets and building LEGO-based robots. And now in three days, on Monday I am going to begin teaching automation and robotics to middle school students full-time (with one media/tech course to keep my communications chops healthy). The courses were originally going to center on VEX IQ and Cortex systems, LEGO EV3 and NXT systems, but now that we’re going to do at least the first half of the school year remotely/online, I’m going to have to find a way to do simulations that will run on low-powered devices (mainly ChromeBooks). Programming won’t be too much of an issue, but it’s not quite the same as laying on the floor with parts scattered all around you trying to get your robot to do the thing you programmed it to do like make a little noise while it avoids running into a wall, or going up a ramp without tipping over. Given that we can’t assume that students have tech or LEGOs at home to work with, it’s going to be an interesting challenge. Oh, and I’m going to have my media students discover the joys of almost daily blogging (my former Full Sail University students should appreciate that…). Here’s today’s video, a recording of an Wall*E-esque robot that I built, followed by images from my prep for the coming school year. Enjoy. 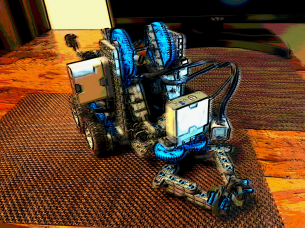 Intro to Robotics with Marty – Header