The IV has been unplugged, a little sock put on my hand to protect it over-night and the nurse has left for the day. Well, I survived that one with a lot of hand holding by Tricia and support from her family (and all my friends reading this and sending your well-wishes). So far no side effects, no additional discomfort and not much else to report. It took all day, almost, for the IV drip to do its thing. I have three more days of this, laying in bed with a tube delivering medicine attached to my hand, getting my temperature & blood pressure taken every hour and adjustments to the dosage along the way. This is way better than leeches or back surgery. Day one done, three more to go.

“Second verse, same as the first.” Nothing new to report after my second treatment session. At 1 pm I decided to watch the Apple Event and thought that it’d be better to view with multiple screens, which meant sitting at my computer in the home office. That was probably a mistake, to sit for that long on an old wooden chair with a make-shift pad. Yeah. Not smart on my part. Tricia brought my nice office chair this evening, but for today it was the wooden chair. Ouch. But no side-effects or additional discomfort to report. As for reversing the nerve damage, nothing to report there either. I might experience some beginning signs of relief in another 24- to 48-hours, but there’s no telling. I have two more sessions to go and remain hopeful that I might see signs of improvement over the weekend. Thinking positive thoughts. 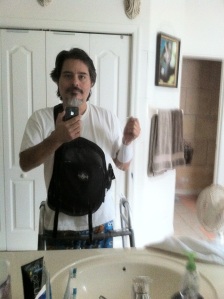 So… on Thursday and Friday my nurse decided to switch me from the drip-pole to a small portable pump, making it much easier to move about with my walker. One problem that popped up was my blood-pressure was a bit elevated, so the nurse had to back down the flow several times and on Friday was a bit concerned as to why my blood pressure was up on both days. Well, part of the reason might have been that I tried to get work done on both days, taking an online meeting for over an hour on Thursday and spending most of Friday morning in my office-chair finishing up the week’s grading and tracking student projects and emails. I have a program on my iPhone called Phocus (phocusapp@gmail.com) that follows the philosophy of breaking up ones work process into 25-minutes sessions of concentrated work with five-minute stand-up breaks in between. Previously, especially when working in the EMDT office, I’ve been pretty strict about getting up every 25-minutes and taking a little walk/bathroom break/etc. But more recently I’ve been finding that I can do two 25-minute sessions and then I need to go lie down for a bit, usually longer than the five-minutes promoted by the program (as in like over 25-minutes). It’s frustrating, but it was pretty much the only way to get my blood-pressure down on Thursday and Friday. I just can’t seem to be able to sit for very long without needing long breaks. So, I take my iPad and take long breaks.

By the end of Friday there were no noticeable improvements in my leg strength or overall pain. I’m also having to fight digestion issues, due to the pain meds, and that’s adding to my discomfort. I was really hoping to see some improvement, but not so much. Things may change over the weekend, we’ll see. I had to remind myself that my treatment entails sending medicine into my bloodstream from the back of my hand or arm, where it travels throughout my whole system and hopefully targets whatever is going wrong with the systems in my legs and feet. There’s something amazing to me about the notion of putting fluids in one part of the body and finding results in the opposite end. Obviously it’s not perfect, it’s not StarTrek where the doctor runs a handheld scanner, then administers a hypo-spray to the arm that instantaneously fixes whatever is going wrong. But, in the end, I’ve found that the real healing begins with the compassion and care of the health-professionals one works with. And I’ve been lucky through-out my experiences, most recently with Nurse Debbie, to have a good soul to have worked with this past week. I know that she’s hoping the best comes from our efforts. Here’s to continue to hope and look for the answer to this problem.