Loving the Line (Even When I’m Not In It)

In the early hours of Friday morning I was delighted to stumble across tweets and blog posts about the lines that had been forming around the world of mac fans looking to buy the new iPad when their local stores were set to open at 8 A.M. Long the object of ridicule, I’ve come to appreciate what might be called the annual gathering of the tribe to celebrate the newest creation by Apple. And for the most part every time I’ve spent time in the line it’s been fun and even entertaining. Unlike the poor suffering souls depicted in the series of advertisements run by Samsung around the time of the Super Bowl, I haven’t found my friends in the line to be grumpy or bored. Waiting over eight-hours can be extraordinarily taxing on ones feet and body if one didn’t think ahead to bring a camping chair, but five-years after the original iPhone lines in 2007, we’ve figured out how to handle things and enjoy our time in line.

In fact, I find the Samsung commercials hilarious. But they also show how little the competition understands about why we not only stand in line, but love the line. Granted, they lost me when they depicted these lines around the country at a time when there are no lines, when you can just walk right in and buy the latest model. Oops. Yeah, in one commercial a guy laments that he’s missing the game (Super Bowl?) to stand in line. Lame. Funny, but doesn’t depict my experiences in the line. I’ll embed several of the commercials below.

Alas, this time, for the new iPad (v3), the online pre-order form didn’t allow for in-store pick-up and only offered home delivery, so I sat at home and eagerly awaited its arrival. Well, actually I was a bit sick and suffering from back aches so because I was napping I slept through the delivery and woke to find the box on my kitchen table. That’s a pretty good surprise to wake up to. Better than standing in line all day, but I did miss spending some time with the tribe.

Memories of the Line: 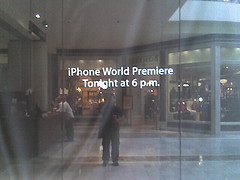 June 2007 – Original iPhone. I had no intension of buying the first iPhone on launch day but headed to a local Apple Store to witness the gathering. After they opened the doors I went across the street to go to the movies. When the movie was over I remembered that they were going to keep the store open late to accommodate the potential crowds, but by nine O’clock I was able to just walk into the store and pick up the iPhone, that I told myself I wasn’t going to buy that night. The gravitation pull was remarkable and the rest is history. Images from the event.

June 2008 – iPhone 3G, June 2009 – iPhone 3Gs, April 2010 iPad (v1). I’d skipped the iPhone 3 and 3s lines by not buying the 3 until six-months after it launched and not buying the 3s. I also skipped the original iPad line by pre-ordering and having it delivered to me at work. This isn’t to say that I didn’t vicariously experience the fun of the line. In 2008 Leo Laporte did 24-hour coverage of the iPhone 3 launch and and I stayed up for most of that. In 2009 the lines reappeared for the iPhone 3Gs launch and I followed along on Twitter and various video podcasts. So, even though I wasn’t in the lines, I followed along and enjoyed the reports.

June 2010 – iPhone 4. For iPhone 4 I pre-ordered but decided be do the in-store pick-up. Now, remember, when I picked up my iPhone 3G it was six months after launch so I thought that there’d be a line but it’d be a matter of quickly moving through the line and getting my iPhone. Ha! First I made the mistake on waiting to get to the line after nine and was a tad concerned that the mall parking lot was full to over-flowing. Thus began my eight-hour wait in a line that wrapped all the way around the mall. And this was for those who pre-ordered. Those hoping to just walk in without a pre-order had a longer wait, generally being told to come back … later. Ack. Yeah, that was unexpected. Images from the event.

March 2011 – iPad 2. I guess I didn’t really learn from my iPhone 4 experience because I didn’t get to the mall until around noon with the doors opening at five. This time I remembered to bring my camping chair. I got through the line a bit after 6 P.M. As I neared the store they were running out of some models causing some of those ahead of me in line to drop out. Fortunately they had the model that I wanted to buy for my mom (white, wifi only, 16GBs). I decided a week later (Saint Patrick’s day) to get up at the crack of dawn and see if I could score one for myself. I wasn’t lucky on 3/17, but came back the next day and got my iPad2. images from the event.

And finally, someone who doesn’t need to stand in any line for any Apple product, Steve Wozniak, knows that it’s about the fun and geek meet-up.