WordPress Theme To the Rescue: Minimatica 1.0.8 by One Designs

Found it. A WordPress blog theme that forces me to focus on what I’m trying to accomplish. It has been a long difficult journey since deciding that I needed to do something about my blog hosting around Thanksgiving. I’ll add the frustrating blow-by-blow rendition at the end of this post. I could go back to 2007 to tell this story, but no one would sit through all of that. Suffice it to say that I’ve been on a blogging pilgrimage for quite sometime and what I’ve been looking for has been a platform/theme that would be magazine-like in that with one glance the reader/visitor would be met with the latest stories in an inviting visual fashion. I wanted something that was distinctively different from the list-view offered by most blogs (a la my LiveJournal days!). 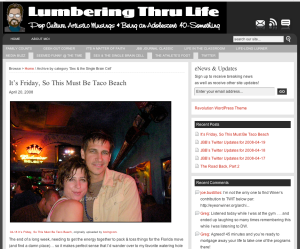 In 2007 I found a perfect theme called Revolution that did all the “magazinie-things” and have purchased several of it’s successors since then (most recently themes based on the Genesis framework. During this past Winter break I was trying to get several features working on my blog and came up with the idea that maybe the reason things haven’t been working is because maybe the framework I’m using is too complex and works well, but only if you stay within their limitations. So, I thought that I might need to look around. Yeah, I’ve spent hundreds of dollars on my themes and I was thinking that maybe there might be a free solution.

Looking through the “newspaper” and “magazine” themes, they all had something to offer, but also a number of compromises. One theme had a great slider option but required that you upload/reset a new “feature” image… What? Why require a new “feature” image when the “feature image” function has been standardized for some time. That was a non-starter. Then I remembered that the big change from the earlier themes was the huge sliding image that new themes presented to the reader/visitor. So I looked up “slider” themes and one popped up called Minimatica and caught my eye because the main screen was a single pane of four half-images in a semi-slider fashion, with no sidebars, multi-panes or any other distractions, just the one window. Brilliant. And it would work perfectly on iPads.

Four posts, that’s it. That forces me to have four posts up front that are worth the reader’s time and effort. And even if one clicks on the links to the categories in the menu, one is then presented with four posts from those categories. It forces me to be much more focused and make categories like featured media and past featured media meaningless. If it’s worth posting it’s worth being on the front page. Archives are listed in a more traditional blog/list view and selected stories get all the full-screen graphic support. I’m really liking this choice. Now I have to just come up with the content worthy of anyone’s time. Back to writing.