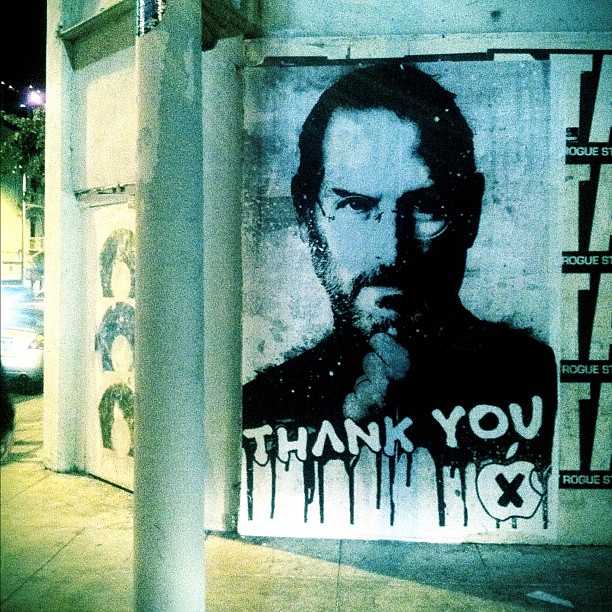 Driving home after working out Wednesday evening, I got a cryptic “OMG” text from a friend and thought that she must have texted me by mistake. I wasn’t at all ready for her reply. It took me a while to find something to text back to her. Almost 18-hours later I’m still more than a little stunned. And like many posts that I’ve read on the Twitter stream or heard on the web, I’m more than a little surprised at how emotional this has left me.

After the premature obit-twitter post from What’s Trending a few weeks ago, I searched twitter and news-sites to make sure that this wasn’t another hoax. Sadly, it wasn’t. My girlfriend and I spent most of the rest of the night watching Leo Laporte‘s TWiT.TV Live coverage of the event. As much as I know that many outside of the tech field won’t give a moments pause over this, but watching Laporte and friends, it felt very much like a gathering of the tribe memorializing the passing of one of our best.

Over the course of the past 18-hours I’ve seen a number of wonderful tributes, stories and creative works related to the life of Steve Jobs. Boing Boing skinned their website to look like an old Mac OS desktop. One of the more interesting posts was by Gizmodo’s Brian Lam who had been in the center of the stolen iPhone 4 controversy last year. His post, titled, Steve Jobs Was Always Kind To Me (Or, Regrets of An Asshole), began with his interaction with Jobs when Lam was new at Gizmodo and how Jobs expressed his fondness for Gizmodo’s geeky coverage of gadgets. The most telling part of the story was that even in the midst of the negotiations to get back the stolen iPhone, when it was apparent that fondness Jobs had for Gizmodo was going to end, as Jobs ended the phone conversation with Lam asking, “”What do you think of it [iPhone4 prototype]?”

Written tributes abound. Ars technica had it’s staff write about The first time I used an Apple computer was… It was interesting to see how many staffers when back to the Apple ][ and how many were from the macintosh or later iMac eras. The newly reborn BYTE website (formerly magazine) had it’s editors and contributors share their memories of Jobs. In a separate BYTE article, Jerry Pournelle, the godfather of all tech-journalism, weighs in on Job’s journey and vision that we got one step closer to with the iPhone and iPad. Finally, one of the more touching and insightful comments was posted by John Gruber in his Daring Fireball blog when he recalled the last time he saw Jobs, at last summer’s WWDC, and noted new grass-stains on the heels of Job’s famous grey New Balance 993 shoes and what that might have meant (Universe Dented, Grass Underfoot).

None-too-surprising, the visual tributes to the man who believed that technology was at it’s best when it empowered our human need to explore and express ourselves through the arts, would find speak out loudly and passionately at Job’s passing.

I was lucky enough to have attended the 2007 Macworld keynote when Jobs unveiled the iPhone and one in 2000 when Jobs had just returned to Apple, became iCEO and introduce OS X to the world. One thing that has stayed with me about the 2007 keynote, besides the energy in the room when the iPhone was revealed, but at one point when there was a technology glitch and Jobs had to riff a bit while the minions fixed whatever had fouled up behind the curtain. Jobs got to talk about how he and Woz would pull pranks in the old days and there was a definite sense of nostalgia in that moment with an equal sense that this was going to be another moment to be remembered for a long time. I won’t soon forget that I was there when the iPhone was introduced to the world.

I never met the man personally but that doesn’t mean that I haven’t felt the pressure wave from the dent he left in the universe. Gone too soon, but never to be forgotten, he will live on in the lives of millions who know that this thing is about something more important than a technological device or an American corporation. He believed in a place where Liberal Arts intersected with Science and Technology for the betterment of the human soul. Some thought that was just hype and marketing, a reality distortion field. I choose to believe that this little wedge in history, the Apple/Jobs Phenomenon, is an opportunity for us to remember and do the great things that humans can do when we get past our prejudices and fears. Steven Paul Jobs 1955-2011, thanks for leading the way. It’s our turn to live different(ly).