Up in the Air and Life Choices

Just saw “Up in the Air,” and don’t know if I should be depressed or not. Ryan Bingham, played by George Clooney, is the quintessential road-warrior, who spends over 300-days a year business traveling and he loves it. He’s a firing expert who works for a firm that gets called in when it’s time for lay-offs. The job isn’t “fun” but he’s found a balance that works for him and it doesn’t include any relationship commitments. His foil is 23-year-old Natalie Keener, played by Anna Kendrick, who has come in to make the job more efficient with technology. She has her whole life mapped out and it’s completely the opposite from Ryan’s.

The movie is basically about life choices and the stories that we tell ourselves to make these choices work. Ryan’s life is a set package and he’s happy. But he has to contend with those around him who are convinced that he’s made a mistake by not settling down and making a lasting relationship investment. Sans the mega-frequent-flier mileage and movie-star good-looks, I seem to resemble those contentions. Alas, it’s been my observation that most of us make these life choices long before we’re even aware that we have a choice. Those first few years after high school and those first few years out of college, set us on paths that tend to be impossible to break away from. And most choose not to, and make their lives there, for good or bad. Then there are those of us who get a wake-up call and/or have a higher expectation for ourselves.

For a long time I was jealous of this one friend, a fellow Biola University graduate, who seemed to be on this straight path, right through his undergrad (in accounting), working for a Newport Beach firm and marrying the boss’ daughter. There was none of this meandering that I’d already done to that point, going from one university to the next, and several majors along the way. Then I found out some time later that he quit the firm and that he and his wife had bought a water-bed retail store. He was happy being the salesman while the wife (also an accounting grad) worked the books. Life is funny that way. 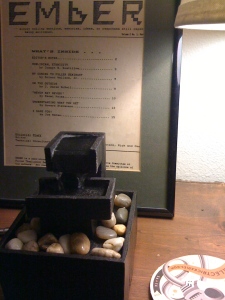 Oddly, as much as I seem to have not fostered any romantic attachments for a number of years, unlike the Ryan character, I’m not cynical about such connections. I like to think that I’ve decided that being alone is better than being with someone who isn’t right for me. And truthfully, at my age, with the moving across the country and the getting kicked out of my doctorate program and buying a new place and working at a teaching position that doesn’t recognize the 40-hour work week, I’ve chosen to not go out there and find someone. It can suck around the holidays, but I have more than a few friends who’ve confessed to having fantasies about sleeping alone and not having to put up with their mate’s chatter. So, life-choices. I’d like to find the important connections in life. I guess I just have to do it in a way that works for me and so far I haven’t found it. I’m at that age where if I go out and do something or some activity it’s because, at it’s core, I enjoy doing that thing. I’m not going to do it “to meet chicks.” I do need to get off my ass, but just because it matters to do the things you love as often as possible. Life-choices.