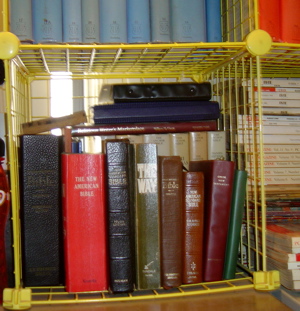 Matthew chapters 1-3. You notice that I waited until a quiet moment at the end of the day to begin this journey. First choice was where to start. A couple of weeks ago I had thought to start in some place like the Psalms, but tonight I thought that the verses might be a bit too ethereal for me right now. Then I thought about the Gospel of John but that starts out pretty much screaming about Jesus’ Godhood. So I decided to start in the same place where I started almost 30-years ago, Matthew’s Gospel.

First thought was how amazing it is that these words are still so ingrained in my memory. It is very much like conversing with an old friend. First chapter, genealogy… while “establishing” his lineage to David and Abraham, it should be noted that the mention of the three women, two were not “proper” family-values births, and the third was a faithful foreigner.

Chapter two, the events surrounding his birth, lots of OT quotations. I’m reading this using my PDA and it would have been cool if the footnotes/references had been “clickable” to jump to the source reference (next version?).

I read some of the references from Isaiah. The Prophets were always a difficult section for me. To be honest this is one of those areas where I’ve found the NT writers to play it fast and loose with their interpretation, often ignoring possible immediate/local references that the author might have been referring to. There’s obviously a lot there.

Chapter three, the ministry of John the Baptist… I think this character influenced me way back when in perhaps a not so positive way because I didn’t feel like I measured up to his devotion and singlemind expression of his calling. I mean this guy is out there and unapologetically in everyone’s face and I was just never comfortable with that part the faith. John is the proto-typical evangelist and in that we were called to “let our light shine” I thought that it meant this, and I was never comfortable with this. It wasn’t exactly a good way for me to start. Now I see that not all of us are called to be John the Baptists and that’s okay. What we are called to, I guess, is the discovery that I’m hoping this new journey will lead to. We’ll see. JBB