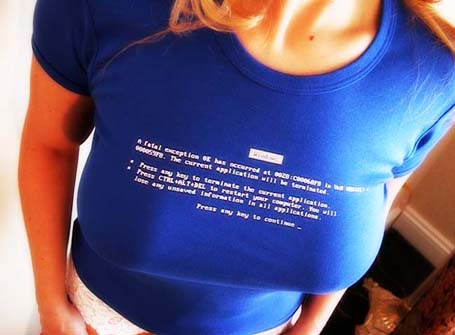 I was talking with a friend over the phone and something interesting happened when we were saying good-night. I mentioned that, in that I wasn’t going to get anything else done (because of the damn computer problem) that I might as well check out what’s happening on Danni.com (a popular p0rn website) to which my buddy said something to the effect that I shouldn’t do that. Huh? I was surprised enough at his response that i asked him, “and why not?” He said that i wasn’t supposed to be doing that anymore. Okay, this was weird. Here’s my “wow check-out the rack on that babe” buddy who continually sent me a link to playboy-esque calendar sites, and he’s telling me…. Well, actually, now that I think about it, it was nice, because I knew that he was just trying to encourage me to do what I said that i wanted to do for myself. But it was a very funny thing to hear him say. I told him that it was really all about balance (something that we’d talked about with the diet stuff). In my old “Christian” way of thinking there was no balance, and God knows that I wasn’t really completely in balance when I ignored that part of my life. So we agreed that p0rn was a bit like “Carbs,” pretty important to living but one cannot live by them alone and it’ll probably make you fat if that’s all you “eat”… or something like that. It was all very weird. JBB